A Manufactured Crisis in Ukraine is Victimizing the World’s Peoples

With the conflict in Ukraine entering its third month, the likelihood of a successfully negotiated peace — an immediate necessity — is becoming ever more remote. This proxy war by the United States is designed to use the Ukrainian people to mortally disable Russia. Those who profit from war benefit, while those most vulnerable suffer: Ukrainian civilians, but more broadly working people internationally and especially in the Global South.

It was expected that the dissolution of the Soviet Union in 1991 would put an end to the first Cold War and the threat of world nuclear annihilation. Instead, the world’s remaining superpower continued its imperialist quest of global “full spectrum dominance” to prevent the emergence of “any potential future global competitor.

Domestically, instead of a “peace dividend” in 1991, the bi-partisan consensus of Democrats and Republicans has been a policy of relentless military expansion. The U.S. military now consumes over half of the federal discretionary budget, which is 12 times the size of Russia’s defense spending. The Ukraine war has been used to justify Congress’s most recent obscene additional $29 billion in war appropriations over what the Pentagon itself had requested, $800 millions of which will go directly to Ukraine in the form of hi-tech military weapons.

Meanwhile, the war in Ukraine is providing convenient cover for the current administration to renege on promised social programs such as COVID protections, full student loan debt relief, free community college, or the public option for Medicare, and the promised seven days guaranteed paid sick leave for the workers. The war has been used to encourage fossil fuel production and blocking fracking on federal land has been forsaken.

Russia’s military intervention in Ukraine could have been avoided if the U.S. had not relentlessly provoked it. The U.S. provided weapons and military training to the fascist-infiltrated Ukrainian army that has targeted ethnic Russians in Ukraine since the U.S.-orchestrated coup in 2014. Some 14,000 people had died in the conflict before Russia directly intervened.

Russia repeatedly called for respecting the ceasefire outlined in the Minsk Accords. The 2015 Minsk II Agreement called for autonomy for the separatist Donbas region in eastern Ukraine, where the majority are Russian-speaking, along with release of prisoners of war and withdrawal of heavy weapons.

Instead, the Ukrainian army increased its attacks on its own citizens, although the peace agreement had been signed by representatives of Ukraine along Russia, the separatist provinces, and the Organization for Security and Co-operation in Europe (OSCE) for western Europe. Then in late February, a planned full-scale assault by the Ukraine army on the separatist region immediately precipitated the Russian invasion (need citation to support this).

The conflict could not have continued without weapons and intelligence openly provided by the U.S. In a hearing before the Senate Armed Services Committee, General Mark Milley, chairman of the Joint Chiefs of Staff, reported that the U.S. and NATO had supplied 60,000 anti-tank and 25,000 anti-aircraft weapons to the Ukrainian army. In recent weeks, the Biden administration ordered another $1.6 billion of “lethal aid” to Ukraine further escalating the conflict.

Contrary to its claims, NATO is not a defensive organization. Its purpose from the start has been to act as an instrument for U.S. world domination and to prevent all challenges to the U.S. hegemony. That is why it was not dissolved in 1991 after the dissolution of the Socialist Camp’s Warsaw Pact. On the contrary, despite the promises made by high U.S. officials to Mikhail Gorbachev that NATO would expand “not one inch east,” it was expanded into fifteen new countries. This relentless eastward expansion of NATO during the past decades has been an existential threat to a nuclear-armed Russia and the main cause of the present military conflict in Ukraine. Now, driven by the war in Ukraine, NATO may be able to add Sweden and Finland in western Europe and Ukraine and Georgia in eastern Europe to its list of members.

NATO is not a true alliance. It is in fact an integrated imperialist army under direct U.S. command. Its constituent states are bound to dedicate significant portions of their national budgets to maintaining this war machine and to offer up their youth as soldiers.

Nor is it serving the interests of Europe, where U.S. nuclear weapons are stationed — in Belgium, Germany, Italy, the Netherlands, and Turkey — making them immediate targets if the cold war turns hot; likewise for Poland and Romania, which now host the U.S. “missile defense” facilities for NATO aimed at Russia.

Not only has the Ukraine conflict been used to oblige NATO members to buy more weapons from U.S. military contractors, but the larger U.S. objective of economically severing Russia from Europe is being advanced. Precluded is an integrated Europe with peaceful commerce between Russia and its neighbors. Instead, Germany, for instance, is being compelled against its economic self-interest to buy U.S. liquified natural gas rather than getting supplied from Russia via the Nord Stream II pipeline at a fraction of the cost.

The eventual peaceful integration of Russia with the rest of Europe has now been forestalled for the foreseeable future. Such a potential integration could have served in the long-term as a counterbalance to U.S. hegemony. Thus, severance of Russia from Europe has been a paramount strategic geopolitical objective for the U.S. And forget about pledges to restore engagement with Cuba, rejoin the Iran nuclear deal, or negotiate with North Korea for a denuclearized zone.

Weaponizing Ukraine as a part of NATO is the key to, in the words of the semi-governmental Rand Corporation, “overextending and unbalancing Russia.” Early on, U.S. strategic planners, such as President Carter’s national security advisor Zbigniew Brzezinski, put into play the elements that would eventually precipitate Russia’s military response on February 24th.

For all the reasons stated above, the U.S. government has pursued trapping Russia in the Ukraine conflict and has every incentive to prolong the conflict. Ukraine’s hands are tied, as it cannot negotiate a settlement without permission from the U.S., which is unlikely to be forthcoming.

The reverberating consequences of the conflict and the associated sanctions by the U.S. and its allies on Russia have been devastating, causing food and fuel shortages globally and an ensuing inflation in the cost of living most impacting those who can least afford it.

Climate chaos, the ongoing pandemic, and inflation are all exacerbated by the conflict. Instead of international solidarity and cooperation to combat these threats, the opposite is occurring with global fragmentation. The U.S. is threatening to sanction countries such as China and India, home to 35% of the world population if they do not cut economic ties with Russia. Pakistan recently experienced a U.S.-backed coup, in part for continuing to have a friendly relationship with Russia.

With the U.S. imperialist thrust to prolong the proxy war to weaken Russia, the voices for peace are regrettably few. Liberals in the U.S. supporting the Democratic Party are reluctant to take a principled stand for peace. Rather, they fully call for the overthrow of Putin and punishing the Russians for their transgressions.

Although liberals were quick to invoke the specter of fascism when it could be associated with President Trump, they exhibit little concern about aligning with real self-avowed fascist elements in Ukraine. Yet the resurgence of a radical right is directly tied to the capitulation of liberals to a failed neoliberal agenda (along with an embrace of a neoconservative outlook on foreign relations), which has alienated and victimized many workers who previously supported liberal and social democratic alternatives.

The Republicans, viewing the upcoming midterm congressional elections, have taken the tactic of advocating for an even more adventurous jingoism. Meanwhile, many alternative views to the imperialist narrative have been de-platformed from social media leaving the U.S. public with a steady diet of Russophobia.

Even the left is not entirely unified on a peace platform. Some view the conflict as simply an inter-imperialist rivalry between a capitalist U.S. and a capitalist Russia primarily over natural resources in which the working class has no stake. While there are elements of truth in such a view, it ignores larger and far overriding issues, especially the destructive impact of NATO’s success in Ukraine on the lives of the working people throughout the world.

On the basis of this assessment of the present situation in Ukraine, the U.S. Peace Council reiterates its statement of March 24 calling for rapidly de-escalating the violence and negotiating a peaceful resolution. Analysts across the political spectrum agree that never has the world been so close to nuclear holocaust.

We call upon the Biden Administration to stop fueling the fire and prolonging the war by sending billions of dollars’ worth of weapons to Ukraine. It is time for these funds to be spent on critically-ignored human needs instead of waging imperialist wars against other nations. 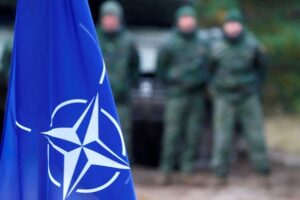 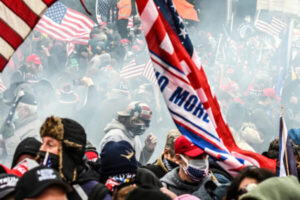 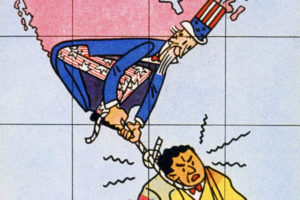 A Century of U.S. Intervention Created the Immigration Crisis